Penn State Laureate to present “Art and Politics: The Case of Corrado Cagli” 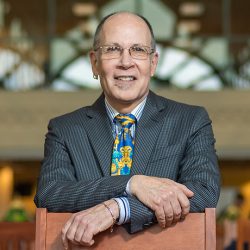 The problematic and contradictory relationship between the art of Italian painter, sculptor and muralist Corrado Cagli and the fascist government that supported him will be explored in an upcoming presentation by Penn State Laureate John Champagne in “Art and Politics: The Case of Corrado Cagli” on Wednesday, October 24, from 12:15–1:15 p.m. in room 121, Gaige Technology and Business Innovation Building. This presentation is free and open to the public.

Champagne, a professor of English at Penn State Erie, The Behrend College, uses Cagli’s career as a starting point for engaging his audience in a discussion of art and the contemporary resurgence of fascism at home and abroad. “Do artists have a responsibility to politics?” he asks. “What is our obligation to art of the past, and what does history suggest to us about the role art plays in world politics today?”

An annual honor established in 2008, the Penn State Laureate is a faculty member who travels the Commonwealth to bring greater visibility to the arts, humanities and the University, as well as to his or her own work. Champagne’s laureate presentation is an expansion of his research for his sixth book, an examination of artistic culture of the Italian fascist years of 1922-45 and the relationship of artistic works to the fascist regime.

John Champagne is professor of English and chair of the Global Languages and Cultures program at Penn State Erie, The Behrend College. Born in Milwaukee, Wis., he wrote his first novel, “The Blue Lady’s Hands” (Lyle Stuart, 1988), while an undergraduate at Hunter College in New York City. His second novel, “When the Parrot Boy Sings” (Meadowlands, 1990), was published two years later.

After completing a master’s degree in film studies at New York University in 1988, Champagne earned his doctoral degree in English from the University of Pittsburgh in 1993. That same year, he began working at Penn State Behrend, where he teaches courses in literature, film, philosophy, composition, and Italian culture. He also has taught ethnic American literature and media theory at the University of La Manouba in Tunisia as a Fulbright Scholar.

Champagne is the author of three nonfiction books—“The Ethics of Marginality, A New Approach to Gay Studies” (University of Minnesota Press, 1995), “Aesthetic Modernism and Masculinity in Fascist Italy” (Routledge 2013) and “Italian Masculinity as Queer Melodrama” (Palgrave 2015)—and currently is at work on a study of Italian artists in the fascist years.

Champagne and his husband, Richard, divide their time between Erie and their apartment in Perugia, Italy.