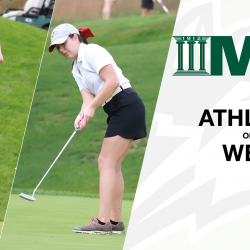 Annville, Pa. – Freshman Luke Fagley and Senior Emily Gilbert were named MAC Players of the Week for their performance from October 8 – October 15, as announced on Oct. 15 by the MAC Office.

Fagley shot a 7-over 79 to finish 11th overall and pace Alvernia to a 344 team score and 5th place team finish at the Alvernia’s Invitational on Tuesday at LedgeRock Golf Club. Fagley carded 11 pars and one birdie on his round of 79.

Gilbert earned her second golfer of the week honor of the season following a round of 80 at the Alvernia Invitational. The senior finished third overall out of 40 golfers at LedgeRock, and was the top Division III golfer in the field. The Golden Wolves were also the top Division III team in the standings with a score of 360. Gilbert birdied three holes in a four-hole stretch to beat MAC golfers from Albright, Delaware Valley, and Stevenson.