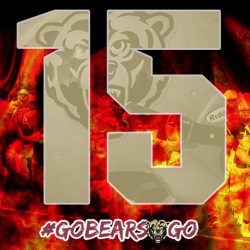 KUTZTOWN, Pa. – Coming off arguably its most complete performance of the season, the Kutztown University football team once again continued to rise in the national rankings, appearing at No. 15 in the latest American Football Coaches Association (AFCA) Division II Coaches’ Poll, released on Oct. 15.

KU was last ranked inside the top-15 in Division II during the 2011 season, when it was voted as high as sixth.

The Golden Bears (6-0 overall, 3-0 Pennsylvania State Athletic Conference Eastern Division) are off to their best start to a season since 2010. They have won eight straight games dating back to last season.

Last Saturday, Oct. 13, Kutztown flexed its muscle and showed why it is a top-15 team in the nation, taking down Lock Haven University 41-0 on Homecoming weekend at Andre Reed Stadium. It was the largest margin of victory this season and the first shutout of the year.

KU has now clinched its fifth straight winning season, the most in program history dating back to the streak of four straight from 1936-1939. Head coach Jim Clements won his 100th career game as a head coach with the victory.

The Maroon and Gold scored 41 first-half points, the most this season, and enjoyed a scoring outburst from both sides of the ball in the win over the Bald Eagles.

Redshirt-junior quarterback Collin DiGalbo (Secane, Pa./Monsignor Bonner) finished 13-for-20 through the air for 203 yards and one touchdown. He ran seven times for 45 yards and a score, becoming the program’s all-time leading rusher in a career by a quarterback with 918 yards on the ground.

Redshirt-senior running back Craig Reynolds (Willow Grove, Pa./Abington) rushed for 46 yards and one touchdown. He ranks second all-time in KU history with 31 career touchdowns and sixth with 2,393 rushing yards. Reynolds also ended his day with 104 all-purpose yards and ranks third all-time at KU with 4,743 in his career.

The Kutztown defense played lights out, forcing six Lock Haven turnovers (three fumbles, three interception) and allowing a goose egg on the scoreboard. It helped in the KU offensive 41-point first half as the offensive unit scored 27 of its points off turnovers. Jake Perry (Harrisburg, Pa./Central Dauphin) had an interception that he returned for a 30-yard touchdown with 0:03 left in the second quarter, just 0:37 after Lee’s touchdown grab, to cap off the scoring output on the day. Perry is seventh on the all-time career interceptions list at KU.

29 different KU defenders recorded at least one tackle. The unit was led by Shawn Turber-Ortiz (Northumberland, Pa./Shikellamy), who finished with nine total tackles and an interception. Amani Justice (Salem, N.J./Salem) and Ryan Meyers (Hellertown, Pa./Saucon Valley) each had sacks, and Ahkee Cox-Cowan (Harrisburg, Pa./Harrisburg) also had a pick and recovered a fumble for KU.

Kutztown travels to take on Shippensburg University on Saturday, Oct. 20 at 1 p.m.