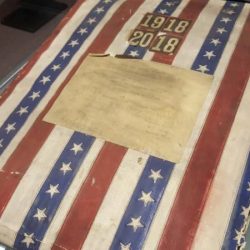 Please join us for a day of education and entertainment as we commemorate the 100th Anniversary of the end of World War I. The day will begin with two consecutive programs that explore the challenges and triumphs of the Great War through the eyes of a local WWI soldier with presentations by William Richardson as he reads and interprets his father’s WWI diaries. From the Frontlines: Diary of a WWI Soldier – Part I will begin at 10:00AM and will be followed by Part II at 12:30PM.

Presenter, William F. Richardson is the son of William Emanuel Richardson, who served in the Great War. Richardson will read and interpret his father’s journal entries in two dramatic presentations that demonstrate the realities of the WWI experience. Richardson is a Berks County native and now lives in Golden, CO. Richardson’s father, William Emanuel Richardson, was born in Berks County in 1886. William’s extensive diaries and writings during this period reveal a profound patriotism, a hopeful idealism, and a keen understanding of the context and background of events as they unfolded. They also reveal a young man’s search for both adventure and romance.

Admission to From the Frontlines: Diary of a WWI Soldier – Parts I & II is $5.00 for members and veterans and $8.00 for non-members. Both programs are included in the admission price.

At 6:00pm the Berks History Center will reveal the contents of a 1918 Time Capsule during an unveiling ceremony. The Time Capsule Opening Ceremony is free to the public.

The day will conclude with a special performance by the Reading Choral Society. The Reading Choral Society’s World War I & Berks Concert begins at 7:30pm in the Berks History Center’s Connor Auditorium. The concert will pay homage to Reading’s Liberty Chorus, which was founded in 1918, and will feature music popular during the era of the Great War.

Tickets for Reading Choral Society’s World War I & Berks Concert are $5.00 for member and veterans and $8.00 for non-members. Tickets must be purchased in advance and do not include admission to From the Frontlines: Diary of a WWI Soldier – Part I & II. Call 610-375-4375 to purchase tickets.

Launched in November 2017, the World War I & Berks project, was a year-long commemoration of the 100th Anniversary of World War I that examined Berks County’s contributions to the Great War and the effects the war had on our local community. The World War I & Berks exhibit, located in the Berks History Center’s Palmer Gallery, tells how Reading and Berks County responded to the nation’s call to arms with a remarkable eagerness to serve and unwavering patriotic displays. Additional stories about World War I were shared throughout the year on the Berks History Center’s blog and social media. Program attendees are invited to tour the World War I & Berks exhibit along with all of the other galleries and exhibits in the museum on November 10, 2018.