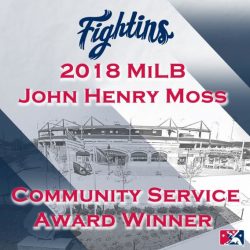 Minor League Baseball has announced the Reading Fightin Phils have received the 2018 John Henry Moss Community Service Award.  They are the sixth-ever recipient of the award.

The award was introduced in 2013 by Minor League Baseball in honor of John Henry Moss, who founded the South Atlantic League in 1959 and headed the circuit until 2007.  The award is given to a club that demonstrates an outstanding, on-going commitment to charitable service, support and leadership.  The award will be presented at the Baseball Winter Meetings Banquet on Dec. 9 at the Mandalay Bay Resort and Casino in Las Vegas, Nevada.  In addition to the award, Minor League Baseball Charities will make a $2,500 donation on behalf of the Fightin Phils to Baseballtown Charities.

“On behalf of Baseballtown Charities and the Reading Fightin Phils, we are honored, and humbled, to receive the John Henry Moss Community Service Award”, said Fightins General Manager Scott Hunsicker.  “Baseballtown Charities thanks the many sponsors, volunteers, R-Phils Front Office staff, game staff, and the fans – the citizens of Baseballtown – for giving of their time, and of their treasure, to help the kids.  The Savage 61 Dream Field, and Gordon Hoodak Stadium at Lauer’s Park, are incredible facilities that will help children for many years to come.  They provide the physical place where volunteers can interact with the children on a human level, and really make a difference.”

This past April, the Fightin Phils unveiled the brand new Savage 61 Dream Field, which is a facility that provides children with physical and developmental disabilities the opportunity to play baseball. The unique rubberized surface is the first field of its kind to be built in Berks County. The project is fully funded by Baseballtown Charities, the Reading Fightin Phils charitable organization.  110 children with physical and developmental challenges played in the inaugural spring league, plus another 60 children played in the fall league.  More than 850 volunteers have devoted their time in working with these children.

The Dream League Field is the second one million dollar stadium built by Baseballtown Charities.  The first, Gordon Hoodak Stadium at Lauer’s Park, built in 2006 has provided more than 1,000 children from Reading the opportunity to learn baseball, softball and life lessons through the game.

Baseballtown Charities’ Dream League is a registered 501(c)3 non-profit organization based in Reading, Pa. that focuses on making dreams come true one pitch at a time.  Since 2002, Baseballtown Charities has worked to build inclusive baseball diamonds as well as bonds between players, teammates and supportive communities. For more information, visit www.baseballtowndreamleague.com.