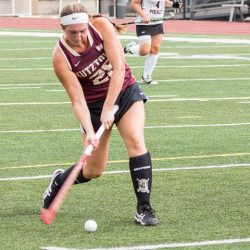 KUTZTOWN, Pa. – Junior midfielder Mackenzie Fuhrman of the sixth-ranked Kutztown University field hockey team had a big say in an undefeated week for KU last week, and in doing so, earned recognition from the league office. Fuhrman was voted this week’s Pennsylvania State Athletic Conference (PSAC) Co-Athlete of the Week along with Erica Tarsi of Millersville University.

The Lancaster native leads the PSAC with 11 assists this season. She also has four goals on the year.

It is the first athlete of the week honor for Fuhrman, who was voted to the All-PSAC First Team and the NFHCA All-America First Team last season as a sophomore.

In the classroom, Fuhrman is a four-year member of the Dean’s List and a two-time PSAC Scholar-Athlete.