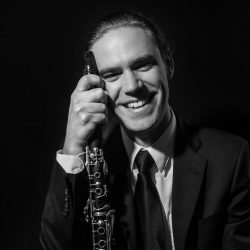 Reading, PA – Berks County native and Boyertown graduate Adam Price released his first recording as a leader on October 26th.  The album, entitled “House Ghosts,” is a collection of original jazz compositions written by Price and centered around themes of Halloween and the supernatural.  It features musicians from both NYC and LA, including pianist Isamu McGregor (touring pianist and musical director for Colbie Caillat). It was recorded at Red Rock Recording Studio in Saylorsburg, PA under the auspices of music engineer Kent Heckman (who has recorded such jazz luminaries as Phil Woods, Keith Jarrett, and David Liebman), and was produced by Brooklyn-based producer Jon Bell (The Landing).  The album has already garnered positive reviews from multiple blogs and entertainment news outlets and has even gotten some international radio play.   Price has been a staple of the music scene in Berks County and South-East PA for many years.  After graduating from Boyertown, he moved to NYC where he attended New York University and graduated with a degree in Clarinet Performance.  After years of living and playing in New York, he decided to move back to Pennsylvania to continue pursuing his career.  He currently spends his time freelancing, touring the east coast, and playing on cruise ships.  Price has been supporting the album with a tour of the northeast that will end with a local album release show at Hidden River Brewing Co. in Douglassville on Nov. 4th.  The new album, “House Ghosts,” is currently available on iTunes, Spotify, and all major music download and streaming platforms.  Physical copies are also available on Amazon.