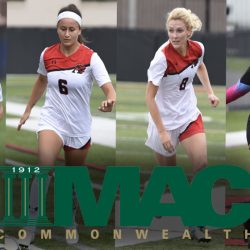 Bieber leads the team in assists (9) and ranks tied for second on the team in points (17). The nine assists rank second in the MAC Commonwealth. Bieber registered a trio of assists in a 3-1 win at Delaware Valley on Sept. 22 and scored a pair of goals in a 2-1 win vs. Stevenson on Oct. 16. The Mertztown, Pa., native became the first Albright player in seven years to notch three assists in a game.

Bross has started all 17 games for the Lions and earned all-league honors for the fourth straight year. This is also the third straight season that she has been named to the first team. The Allentown, Pa., native helped lead a defensive effort that saw Albright register four shutouts while conceding just 21 goals.

Haley leads the Lions with 13 goals and became the first player since Anne Curry in 2006 to register double digit goals in a season. Haley also notched a pair of hat tricks on the year in a 5-2 win over Marywood on Sept. 1 and in a 4-1 victory at Hood on Oct. 2. The sophomore’s 13 goals rank second in the MAC Commonwealth and she leads the league with five game-winning goals.

This marks the second straight year that Tunney has earned all-league honors after she was a member of the first team in 2017. This season, the senior has registered a 1.05 goals against average and four shutouts to go along with a 9-4-2 mark in 16 games (15 starts).

This is also the second time in three seasons that Albright has had four players earn all-league honors.