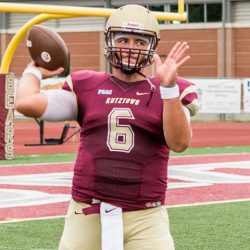 KUTZTOWN, Pa. – Redshirt-sophomore quarterback Eric Nickel rushed for a career-high 141 yards, a program-record for rushing yards in a single-game by a quarterback, in a 62-10 victory at Millersville University on Saturday, Nov. 3, and the league office rewarded him for his success. Nickel was voted the Pennsylvania State Athletic Conference (PSAC) Offensive Athlete of the Week, as released on Nov. 5.

This is the second honor for Nickel, who made his second career start against the Marauders. He was also voted AOW after a Sept. 15 win at Gannon.

Nickel finished with 182 yards and four touchdowns through the air, and also found the end zone on the ground once and led KU with 17 rushing attempts for 141 yards. He found eight different receivers, four of which caught touchdown passes.

In two career starts this season, Nickel has passed for 676 yards and nine TDs, adding a score on the ground in each game.

Kutztown wraps up its regular season portion of its schedule next Saturday, Nov. 10 in the season-finale at Edinboro University at 12 p.m.