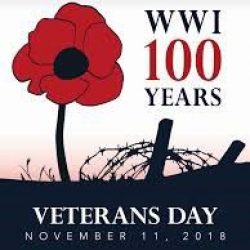 Union Township—On Sunday, November 11, the Friends of Hopewell Furnace invite the public to commemorate the 100th Anniversary of the end of World War I with veterans and historians Gene Delaplane and Richard Nearhood.  Their program “Reflections on World War I” will honor all veterans both past and present. The free program begins at 2 p.m. at Hopewell Furnace’s Bethesda Church.

Located on Bethesda Road, a three minute drive from the park’s visitor center, Bethesda Church is the oldest building in the park and has an adjacent graveyard where veterans of numerous wars have been buried. Normally closed, the National Park Service is opening this building especially to mark this Veterans Day.

From the Revolutionary War through the Civil War, Hopewell Furnace has proven a valuable resource for America’s war efforts.  Mark Bird, founder of Hopewell, joined the fight for Independence as a Lieutenant Colonel in the Second Battalion of Berks County Militia and served as George Washington’s deputy quartermaster.