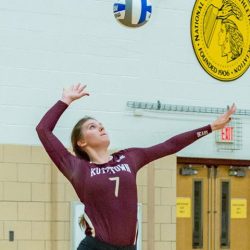 KUTZTOWN, Pa. – Kutztown University women’s volleyball’s Brittney Moyer, whom finished her KU career with over 1,000 kills and 800 digs, has been selected as a member of the Pennsylvania State Athletic Conference’s (PSAC) all-conference team, earning third-team accolades.

The All-PSAC selection is the first for Moyer and the first for the Golden Bears since 2015. Moyer, who played her freshman season at Lock Haven, has racked up 1,026 kills, 863 digs and 107 service aces during her time in Maroon and Gold, leading the team in kills in both 2016 and 2017.

Including her time at LHU, the Orwigsburg-native has amassed 1,325 career kills and 1,178 digs in her collegiate tenure. This season, Moyer started in 28 matches, totaling 286 kills and 265 digs with a .181 attack percentage. She surpassed the 1,000 kill-milestone in KU’s match at East Stroudsburg on Oct. 27, and her 1,026 career kills rank sixth all-time in program history.