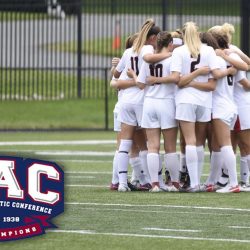 The quartet played key roles as Albright rallied to top Wilkes and advanced to the finals for the first time in program history before dropping a 3-2 heartbreaker to McDaniel in the November 18 championship.

Bieber collected an assist in Saturday’s come-from-behind win against Wilkes. The Mertztown, Pa., native set a single-season program record for assists with 13 helpers and also added five goals after starting all 20 games for the Lions. Bieber’s 13 assists broke the previous program record of 11 that had been set by Steph Deswert in 2004 and 2005 and helped her earn First-Team All-MAC honors.

Bross notched her second goal of the ECAC Tournament with a header on Sunday at McDaniel that tied the game in the first half. She had scored the game-winner with a header off a corner in the quarterfinal victory over Westminster. The Allentown, Pa., native earned First-Team All-MAC Honors for the third straight year after collecting three goals and recording 15 shots, while leading a strong defensive effort from the Lions that saw them allow just 26 goals in 21 games.

Hasanaj scored her first career goal in the 83rd minute of Saturday’s 2-1 win over Wilkes and added an assist on Sunday against McDaniel. She finished the season with a goal and three assists while starting 19 of 21 games for head coach Pat Stanco‘s squad.

Tunney was named to the All-Tournament team for the second consecutive year after making 15 saves on 32 total shots faced in two games over the weekend. The Galloway, N.J., native appeared in 20 games and made 19 starts for Albright, posting a 12-5-2 record and five shutouts to go along with a 1.10 goals against average. Tunney earned Second-Team All-MAC honors.