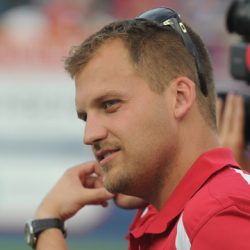 The Reading Fightin Phils, double-A affiliate of the Philadelphia Phillies, have announced that Matt Hoffmaster has been named Assistant General Manager.  Hoffmaster was previously Executive Director of Operations.  He will be entering his 14th season with the Fightin Phils.

“Matt has been an integral part of the R-Phils front office family for many years”, said Fightins General Manager Scott Hunsicker.  “His communication skills and leadership qualities are outstanding, as he works in concert with our tremendous staff.  An example of his leadership would be the very successful Baseballtown Gridiron Classic football series that Matt spearheaded for us this past season.  We look forward to Matt continuing to grow as a vital part of our staff, and of this community.”

The lifelong resident of Reading has been with the organization since 2004, when he started as a mascot.  He graduated from Muhlenberg High School and Slippery Rock University.  Hoffmaster became an intern in 2005 and has since elevated his way up in the organization.  He became full-time with the organization at the end of the 2007 season.  He has held multiple positions over that time.

“I’d like to thank the Reading Fightin Phils organization for this opportunity.  The Fightin Phils mean a lot to me since I attended countless games at FirstEnergy Stadium while growing up and they provided me my first full time job upon graduating college”, said Hoffmaster.  “I look forward to continue working with an amazing group of co-workers as we grow the Fightin Phils within our surrounding communities while offering affordable family entertainment.”

Hoffmaster currently resides in Spring Township with his wife Erin and son Cole.