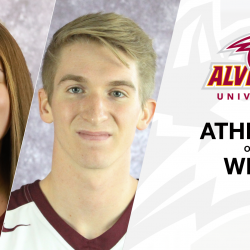 Reading, Pa. (Nov. 26, 2018) – Women’s Basketball sophomore Gabriella DeVito and Men’s Basketball junior Nick Youngkin were named Alvernia Athletes of the Week for their performance during the week of November 19 – November 25.

DeVito led the Golden Wolves to a 67-40 win over Cedar Crest College on Tuesday evening. DeVito scored a team-high 16 points in just 20 minutes of action. The sophomore went 6-14, including 4-7 from beyond the arc, and had one assist. DeVito is currently leading the team with an average of 9.8 points per game.

Youngkin earned the Athlete of the Week honor for the second week after leading Alvernia 72-52 win over Juniata College on Sunday. Youngkin scored a team-high 20 points and was one rebound shy of a double-double. The junior also had an assist and a steal for the Golden Wolves. Youngkin is also leading Alvernia with 14.2 points per game.