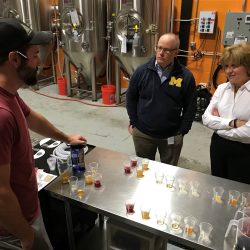 HARRISBURG, PA  – The Brewers of Pennsylvania (BOP), the state’s official beer guild, was pleased and honored to host Senator Judy Schwank at the latest Brewer For A Day event held at Chatty Monks Brewing Company in West Reading on November 27, 2018.  This was the BOP’s fourteenth successful Brewer For A Day event, an initiative designed to give state legislators a hands-on, insider’s perspective on the brewing process, as well as further educate Pennsylvania Senators and Representatives on the direct economic impact craft brewers have on communities throughout the state.

Sen. Schwank received an up-close brewing experience where she toured the brewery, weighed hops, analyzed malts, and assisted with the brewing process that helps Chatty Monks produce some of Pennsylvania’s finest craft beers. 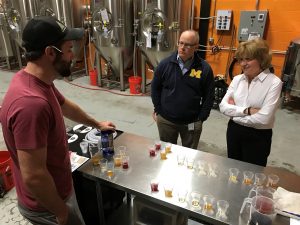 “On behalf of Chatty Monks Brewing Company, I would like to extend my appreciation to Senator Schwank for taking the time out of her demanding schedule to participate in our Brewer For A Day program,” said Rob Metzger, owner of Chatty Monks. “Knowing that she recognizes craft beer’s rapidly growing part of Pennsylvania’s economy and is willing to learn more about our industry gives us confidence in her leadership in supporting craft breweries throughout our region.”

“We’re fortunate to have Chatty Monks call Berks County home,” said Senator Schwank. “I am so proud of the work they have accomplished in four short years, and am grateful to have played a small role in their successful launch.”

In July, 2016, Pennsylvania Governor, Tom Wolf, signed a $1.3 billion revenue package. Part of that package included a Malt Beverage Tax Credit not to exceed $5 million annually. The tax credit, matching equipment and facilities investments made by applicant breweries, has been one of the BOP’s top legislative goals since 2013. The BOP fully supports this tax credit measure, and considers it a major victory for all craft breweries in the Commonwealth, particularly smaller breweries as the benefits of the measure is capped at $200,000 per year, per brewery. From 2016 to current day, many BOP members have greatly benefited from the Malt Beverage Tax Credit.

that brings together leaders of Pa.-based breweries in order to promote and protect the brewing

industry in the state.  The Brewers of Pennsylvania, a strong and influential organization, serves the consuming public of Pa. by encouraging brand diversity in the market. BOP members employ an estimated 10,000 employees earning $296 million in wages and generating $1.1 billion in direct economic benefits to communities throughout the state.  Its signature annual event is the popular  Meeting of the Malts #supportPAbeer