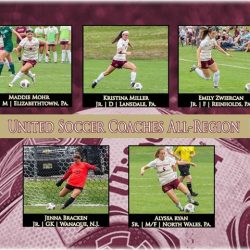 Mohr is a three-time All-PSAC First Teamer. She started in all 20 games this season, recording three goals and an assist, and was a strength for KU both on the offensive and defensive third.

The Elizabethtown native has started in 65-of-66 games through her first three seasons. She ranks fifth in program history with 28 career goals and is seventh with 64 career points. These latest honors adds on to a growing list of accolades including a two-time All-America (2017 First Team, 2016 Third Team).

Zwiercan, the 2017 D2CCA Atlantic Region Player of the Year, is a 2x All-PSAC First Teamer. She started all 20 games this season and totaled 11 goals, fourth in the PSAC. She was also in the top-six in points with 25 (11 goals, three assists).

The Reinholds native ranks fourth all-time at KU in career goals (30) and assists (18), and is tied for second with 78 career points.

Zwiercan’s postseason honors from last season include D2CCA All-America Third Team and the 2018 KU Female Athlete of the Year.

Miller achieves her fourth postseason honor after being voted an All-PSAC First-Teamer, D2CCA All-Region First Teamer and CoSIDA Academic All-District. The junior captain started all 20 games this season, and each of the last 41 games within the last two seasons, in the center of the KU defense. She scored a career-high three goals this season.

The Lansdale native was the rock of a KU defense that allowed just nine goals this season, which is the least in a season in program history.

Bracken had a career-best season in the Maroon and Gold. Earlier this season, in a 1-0 victory at Shippensburg back on Oct. 9, she became the program’s all-time leader in career wins and career shutouts. Bracken has 32 wins and 22 shutouts through her first three seasons. She ranked first in the PSAC with a .918 save percentage and second in both goals against average (.389) and shutouts (11).

It is the third accolade for Bracken, who was voted the PSAC Defensive Athlete of the Year and a First Teamer, and also All-Region by D2CCA. She played in 18-of-20 games this season and tallied a career-high 78 saves. She is also seventh all-time with 190 in her career.

Ryan, a two-year team captain, was an All-PSAC Second Teamer this year. She appeared in all 20 games this season and in each of the last two seasons, netting three goals and adding two assists to her total this season.

The North Wales native has been a regular in Burstein’s lineup throughout her four years in a Kutztown uniform, playing in 82 career games, tied for second in program history. Last season, Ryan was also named to the All-Atlantic Region Third Team.

The Golden Bears finished the 2018 season at 14-4-2 qualifying for both the PSAC and Atlantic Regional Tournaments.