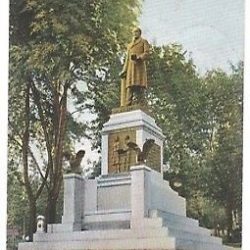 The first monument installed in City Park honored the great beer mogul Frederick Lauer and the 2nd was most likely the McKinley monument, standing just to the right of the Lauer monument along Perkiomen Avenue.

William McKinley was the 25th President of the United States, serving from March 4, 1897, until his assassination six months into his second term in mid 1901.  He was the 3rd President to be assassinated. McKinley was the last president to have served in the American Civil War and the only one to have started the war as an enlisted private in the Union Army and ending as a brevet major.

After the war ended, McKinley began studying for a career in law.  He attended the Albany Law School and was accepted into the bar a year later in Warren, Ohio in March 1867. When his Army friend Rutherford B. Hayes was nominated for governor in 1867, McKinley made speeches on his behalf in Stark County, Ohio, his first foray into politics. In 1869, McKinley, a Republican, ran for the office of prosecuting attorney of Stark County, an office usually then held by Democrats, and was unexpectedly elected; however, he lost his bid for re-election in 1871 to a Democrat.

The next year, McKinley undertook a high-profile pro bono case defending a group of coal miners arrested for rioting after a clash with strikebreakers and he succeeded in getting all but one of the miners acquitted. The case raised McKinley’s standing among laborers, a crucial part of the Stark County electorate. McKinley’s standing with labor helped him to win a congressional campaign for Ohio’s 17th district in 1876.

McKinley next served 2 terms as Ohio’s Governor, winning in the 1891 and 1893 elections. McKinley, at some unknown point in time, turned his sights on the Presidency and he ran a successful front porch campaign to win the contest against William Jennings Bryan in 1896.   Front porch campaign is a low-key electoral campaign used in American politics in which the candidate remains close to or at home to make speeches to supporters who come to visit. McKinley’s opposing candidate, William Jennings Bryan, gave over 600 speeches and traveled many miles all over the United States to campaign, but McKinley outdid Bryan by spending about twice as much money campaigning.

As President, McKinley continued his front porch approach and did not like security personnel to come between him and the public. He often went for walks or drives unaccompanied by security.  Six months into his 2nd term as President, McKinley went on a scheduled trip to the Pan American Exposition in Buffalo, NY and gave a speech on September 6, 1901 urging an end to American isolationism. He proposed trade arrangements which would allow US manufacturers’ new markets. “The period of exclusiveness is past. The expansion of our trade and commerce is the pressing problem. Commercial wars are unprofitable.” His speech received loud applause.

Later that day during a public reception, McKinley was shot twice in the abdomen while shaking hands with the public.  On September 14, 1901, eight days later, President McKinley succumbed to gangrene. Edward L. A. Pausch, a Danish-born sculptor, was summoned to Buffalo to make a death mask of McKinley. Death masks, usually made of wax or plaster of Paris, were common for major personalities of the time.

In 1903, Pausch was commissioned to create a sculpture of McKinley for a monument to be erected in Penn’s Commons, now Reading City Park by the predecessor of the Chamber of Commerce.  The death mask was used as a model for the face on the Reading sculpture, showing the president in a double-breasted, knee length coat holding a copy of the speech he delivered at the Pan-American Exposition. The monument was dedicated with great fanfare on June 8, 1905. It was the 1st McKinley monument in Pennsylvania.

The 22-foot-tall bronze and granite monument, supported by a 17-square-foot base, cost an estimated $10,000 (approx. $250,000 today!). Beneath McKinley’s statue, a boy and a girl in bas relief are singing McKinley’s favorite hymn. Two bronze American eagles guard the statue; one has a serpent in its talons, symbolic of dealing a death blow to the anarchy championed by McKinley’s assassin.