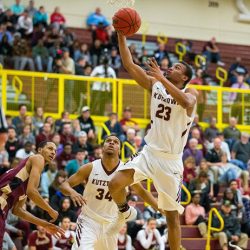 KUTZTOWN, Pa. – Kutztown University redshirt-senior Anthony Lee has a knack for finding the basket. His scoring prowess has been on full display of late and the league office took notice, awarding the shooting guard this week’s Pennsylvania State Athletic Conference (PSAC) East Athlete of the Week, released on Dec. 3.

In a 2-1 week for the Golden Bears (5-3 overall, 1-1 PSAC) last week, Lee averaged 26.7 points, three rebounds, 2.7 assists and 1.7 steals per game, while averaging 30 minutes on the court. It is the fifth career weekly award for Lee, who is a returning 2018 All-PSAC East First Team honoree and All-Atlantic Region Second Teamer.

The Willow Grove native is on top of the PSAC in scoring at 26.0 ppg in 36.1 minutes per game, ninth in the conference. His 91.7-percentage from the free-throw line also ranks first in the PSAC.

Lee had 28 and 37 points respectively in wins against Jefferson and Clarion, while dealing with foul troubles against third-ranked IUP. He has scored in double-figures in all eight games this season and in the last 37 games of his career.

Trailing 72-71 with 3:54 remaining, Lee scored five straight to guide KU to the 76-75 victory over the Rams last Wednesday, Nov. 28. He added four rebounds, four assists, three steals and a block. In the win against the Golden Eagles Sunday, Dec. 2, Lee netted 37 points before the middle of the second half, and with the game in hand, was able to rest the final 10-12 minutes.

A two-year team captain, Lee is the school-record holder for 3-pointers made in a game (8) and season (83), and for 3-point percentage in a season (.516) and career (.486). He is also a five-time PSAC East Athlete of the Week and a four-time PSAC East Freshman of the Week.