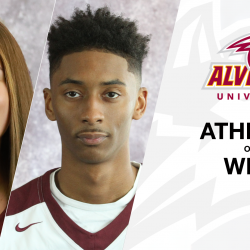 DeVito led Alvernia in scoring in an 0-2 week for the Golden Wolves. Against Hood College in the MAC Commonwealth opener on Wednesday, Devito posted 14 points in 33 minutes of action. She also had three steals for the Golden Wolves and one assist. On Saturday against Widener, DeVito had a career-high 24 points for Alvernia in 29 minutes of action. DeVito went 7-14 from beyond the arc, and was 8-17 overall on the afternoon. The sophomore currently sits second in the MAC in three-pointers made per game.

Taylor posted double digits for the Golden Wolves in an 0-2 week for Alvernia. In the MAC Commonwealth opener against Hood College, Taylor had 12 points, five assists, and eight boards in 28 minutes of action. Taylor played all 40 minutes against Widener on Saturday, posting a career-high 25 points. Taylor also had six assists and two rebounds in the loss to the Pride.