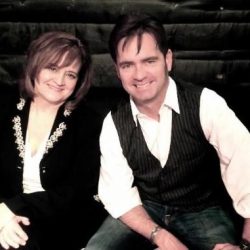 Program features favorites including “How Sweet It Is,” “Carolina in My Mind,” “I Feel the Earth Move,” and “You’ve Got a Friend” performed by Kirsti Mann and Jonathan Birchfield

“I can’t think of a better way to honor the theme of New Year’s Eve, celebrating the old and welcoming the new, than with a performance of renowned classics with live accompaniment by orchestra,” said Constantine. “Classic rock, soulful blues, and a vibrant orchestra; it’s a wonderful combination.”

Kirsti Manna is a Nashville-based songwriter, publisher, producer, and actor with numerous credits to her name, including her national children’s television show, “Kirsti’s Manor.” Her six-week Billboard #1 hit song “Austin” introduced Blake Shelton to country radio, and she has written countless other hits. Artists such as Gretchen Wilson, Colt Prather, and many others have recorded her songs.

Jonathan Birchfield is a guitarist, professional entertainer, and songwriter from the foothills of North Carolina. For more than 25 years, he has toured throughout the Southeast as a solo performer and with his band. He has shared the stage with Brooks and Dunn, Edwin McCain, Mac McAnally, Allison Krauss, and more. In addition to his performing career, he also works as an audio specialist on special events such as the 2014 Winter Olympics.

Tickets for New Year’s Eve: The Music of James Taylor & Carole King can be purchased at Ticketmaster, 610-373-7557 or [email protected]. Couples packages are also available, which include overnight accommodations, dinner, post-concert reception, and breakfast buffet.

Additional performances in the 2018-19 season include a performance featuring acclaimed pianist Julio Elizalde in Beethoven Piano Concerto on January 26; Lincoln Portrait: Images of Freedom, Aaron Copland’s tribute to the nation’s 16th president with photochoreography by Westwater Arts on March 9; the magic of cirque with aerial flyers, acrobats, contortionists, jugglers, dancers, and more, in Cirque De La Symphonie on April 13; and Puccini’s Tosca in collaboration with Berks Opera Company, the Reading Choral Society and Berks Youth Chorus on May 4.