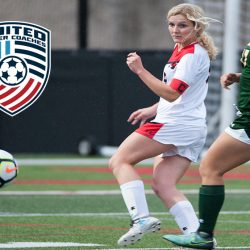 To be eligible for the award, a student-athlete must have at least a 3.30 cumulative grade point average (on a 4.0 scale) throughout his or her career, start more than 50 percent of all games and be a significant contributor to the team as well as be a junior or above in academic standing.

Bross is the first Albright player to receive this honor since Erin Hand was named to the then-NSCAA honorable mention team in 2013. To be eligible, the student-athlete must be nominated by her head coach and have at least a 3.30 cumulative grade point average.  Individuals must start more than 50 percent of all games and be an elite player, supported by playing honors.

In the classroom, the Allentown, Pa., native has maintained a 3.70 GPA as a Political Science major.

This season, Bross also earned United Soccer Coaches’ All-Region honors, All-MAC Commonwealth First Team honors and was named to the ECAC All-Tournament team. She scored three goals including an overtime game-winner against Westminster in the ECAC Quarterfinals and led a defensive effort for a Lions’ team that allowed just 26 goals in 21 games.