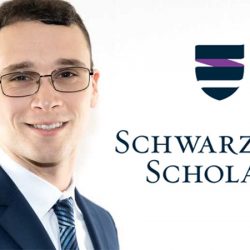 Ryan Morris, a first-generation college student who, at the age of 18, was a National Association for Stock Car Auto Racing (NASCAR) driver, has won a Schwarzman Scholarship, one of the world’s most prestigious graduate fellowships. Morris, who will graduate from Penn State Berks with a B.S. in business with a concentration in marketing and management and a minor in entrepreneurship and innovation in May 2019, is the second student within Penn State University to be selected for the Schwarzman Scholarship.

Morris describes finding out that he received the scholarship as “surreal” and states that he never would have fathomed that he would one day be a Schwarzman Scholar studying in China.

“I originally planned to be a professional race car driver, and I even made it to the NASCAR level my senior year of high school where I competed in the Whelan All-American Series. I really wanted to continue climbing the NASCAR ranks and forget about the possibility of college, but I realized there is more to life than winning races. My high school guidance counselor suggested that I look at Penn State Berks, so I came for a tour and fell in love with the campus.”

One of 147 scholars selected from more than 2,800 applicants from around the world in a rigorous application process, Morris will begin his studies in August 2019. Scholars will receive a fully funded scholarship to study at the new Schwarzman College at the prestigious Tsinghua University in Beijing. Morris will join the Class of 2020 in pursuing a master’s degree in global affairs with a concentration in economics and business.

“I was impressed by Ryan’s focus and determination from the moment he heard about the scholarship from Caitlin Ting, Director of the Fellowships Office [at Penn State University] on her visit to campus to when he went to China with an embedded honors course and could only glimpse the financial district from a distance,” stated Dr. Sandy Feinstein, honors coordinator and professor of English at Penn State Berks, “When it came to the application itself, he was assiduous and undaunted: He wrote numerous drafts of his essays and withstood hours of grueling practice interviews.”

When asked why he applied for the Schwarzman Scholarship, Morris explained, “I enjoyed China when I visited for an embedded honors course last March–I like the culture. I also saw this as my chance to form a foundation to promote positive change in the world.”

Morris serves as two-term president of the college’s Student Government Association and he is a Schreyer Scholar. During his time at the college, he applied the knowledge he gained through the business degree program and the entrepreneurship minor to co-found a start-up with a fellow student: Traduki Technologies, LLC offers real-time language translation services for health care professionals and businesses. The company is piloting the technology in health care, connecting health care professionals with freelance translators who are available via video chat, phone call, text message, and in person.

Morris states that he plans to continue working with Traduki remotely while studying in China. His ultimate goal is to leverage the knowledge he gains in the Schwarzman Scholars program to continue his entrepreneurial ventures with a focus on tackling social issues that deter underserved populations from accessing quality health care.

“I feel very fortunate to be part of this cohort and to learn from people all over the world through the Schwarzman Scholars program,” Morris stated. “I am grateful to Dr. Sandy Feinstein, honors coordinator, for encouraging me to apply and the college’s business faculty who wrote letters of recommendation and spent hours in a mock interview with me in preparation for the actual interview in New York City. I also credit the Penn State Berks business degree program and entrepreneurship minor for providing a solid foundation.”

The Scholars were selected through a rigorous application process designed to evaluate academic ability, as well as leadership potential and strength of character. More than 400 semi-finalists were invited to interview in either Beijing, Bangkok, London or New York, and went before panels of distinguished figures comprised of CEOs, former heads of state, university presidents, nonprofit executives, journalists and other leaders from around the world.

The newly announced class is made up of students from 38 countries and 119 universities, with 40 percent originating from the United States, 20 percent from China and 40 percent from elsewhere around the globe.

“Ryan’s intellect, determination, and ability to inspire others, attributes which served him so well in racing, are key factors in his academic and personal achievement,” stated Dr. Lolita Paff, interim division head for engineering, business, and computing at Penn State Berks and Morris’ Schreyer Honors College thesis adviser.

The Schwarzman Scholarship program launched in 2015, and it is designed to prepare its graduates to build stronger relationships between China and a rapidly changing world and to address the most pressing challenges of the 21st century. Stephen A. Schwarzman, co-founder, chairman and CEO of the private equity firm the Blackstone Group and chairman of Schwarzman Scholars, has contributed more than $100 million to the program and is leading a fundraising campaign to raise an additional $500 million to endow the program in perpetuity.

The program’s curriculum, which awards Scholars a master’s degree in global affairs, was crafted by talented academic leaders from some of the world’s most prestigious universities, including Harvard, Yale, Princeton, Stanford, Oxford, and Tsinghua. In addition to a core curriculum, Scholars will pursue an individually designed concentration, drawing from courses in public policy, international studies, and economics and business, as well as from other departments at Tsinghua University. The Schwarzman Scholarship program continues to innovate its curriculum and co-curricular activities, bringing in leading faculty from around the world and hosting prominent thought leaders.

Beyond the classroom, Scholars will gain unrivaled exposure to China and a broad network of important relationships through unique internships, mentorship opportunities, high-profile speakers and opportunities to travel throughout China. Scholars will also have access to career services support that will help prepare them to make the best of their time in Beijing and beyond.