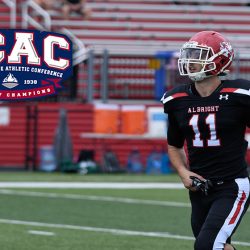 This marks the second time Dickerson has earned All-ECAC honors in his collegiate career after he earned First Team honors in 2016 as a returner.

Dickerson set career-highs with 1,063 receiving yards on 81 receptions and 13 touchdowns that ranked him second in the conference in each category. He finished the season by scoring touchdowns in six-straight games and tallied 100-yard receiving outputs in six games as well for the year. He became the fifth wide receiver in program history to reach 1,000 yards for the season and will finish with 4,027 all-purpose yards.

His efforts this season also garnered him All-MAC First Team honors and D3football.com All-East Region Third-Team honors as well at wide receiver. His best game this past season came against FDU-Florham when Dickerson posted 199 yards receiving on 14 catches and caught three touchdowns. The 14 receptions were the most in a game for a Lions player since 2015 and he also ran for one touchdown as well to become the eighth Lions player to score four or more touchdowns in a game.