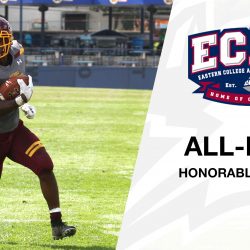 Carey earned All-ECAC Honorable Mention honors for his 2018 performance as a running back.

Carey led the Alvernia offense with 102.3 yards per game, and scored 12 touchdowns on the season. Carey rushed for over 200 yards on two occasions. The freshman had 230 yards against Misericordia, and 252 yards in the final game of Alvernia’s Inaugural Season against the University of New England. Carey also averaged 7.27 receiving yards per game for the Golden Wolves.

This is Carey’s second postseason honor this year. He was named First Team All-MAC in November.