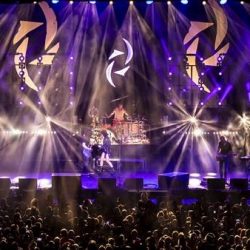 SMG Officials in Reading are excited to announce that the Santander Arena and Santander Performing Arts Center have attained a Top 100 ranking in nationwide ticket sales for 2018. This ranking comes from Pollstar, a trade publication for the concert touring industry that collects data from venues and promoters after every event. Pollstar then compiles this information for its “Year-End Venue and Touring Rankings.” The Santander Arena was ranked #144 Worldwide and #80 in United States Arena ticket sales, up seven spots from the previous year’s US ranking. The Santander Performing Arts Center was ranked #117 Worldwide and #94 in US Theater ticket sales, two spots up from 2017’s US ranking.

General Manager, Mark Wallace, about the achievement: “This is a praise worthy accomplishment for our entire staff.  They continue to do a tremendous job in securing and servicing talent, while providing great customer service to the talent and our fans who attend shows at our two venues.  It’s because of all of their hard work and dedication, that we are honored and pleased to receive this recognition from our industry.”

2019 awaits an even bigger year for the Santander Arena as it kicks off the year with January’s annual World Championship Ice Racing Series. In the months following, The Harlem Globetrotters, Winter Jam, Bad Bunny and Kelsea Ballerini are expected to bring a full crowd to the Santander Arena. Additionally, 2019 will be the first year the Santander Arena hosts the District III High School Basketball Championships – an event that is typically hosted outside of Reading, PA. At the Santander Performing Arts Center, the Broadway Series is set to return and draw large crowds for performances of EVITA, Cinderella the Musical, and Rock of Ages. Furthermore, the Santander Performing Arts Center anticipates a full house for a variety of shows including Michael Carbonaro, Dennis Miller & Mark Steyn, Disney Junior Dance Party, and a fan-favorite – Get The Led Out.