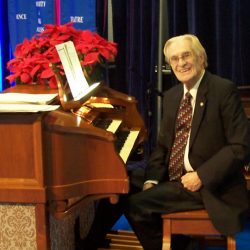 For the last four decades, Harold “Hal” Kremser has played the organ during Penn State Berks commencement ceremonies. He recently announced that his performance at the fall commencement on December 14th will be his last.

Kremser, 91, was originally invited to play the organ during commencement by the late Dr. Harold W. Perkins, CEO of Penn State Berks from 1959-1984. He explains that he began teaching at Penn State Berks and Penn State Lehigh Valley campuses as an adjunct faculty member in the early 1980s, and when he retired, he was asked to continue to play at commencement.

“I always thought it was an honor to be asked to do it,” comments Kremser.

Over the last 40 years, Kremser has seen quite a few changes at the college. Penn State Berks transitioned from having one annual spring commencement to three commencements per year: one in the fall and two in the spring to accommodate the growing number of students earning their baccalaureate degrees at the college. Beginning in 2013, spring ceremonies were held outdoors­–weather permitting.

“The biggest challenge in the spring was the wind–it would blow the [sheet] music around as I was playing,” adds Kremser with a chuckle.

Kremser was accustomed to improvising. He had a long career, teaching and performing music–many times for a live audience in a sizable venue. He recalls one time that he was called at the last minute to replace a piano player who was accompanying big-band vocalist Helen O’Connell when she came to Reading. O’Connell performed with bandleader Jimmy Dorsey in the 1940s. She also appeared with Dorsey and his orchestra in a few early-40’s films and later became a TV personality.

“O’Connell was to perform two-shows-a-night for a week in a night club in Reading,” Kremser explains. “On the first night–Monday–she was unhappy with the piano player and said she wouldn’t perform any more shows until a new one was hired. They called me and I was hired on Tuesday. I played the rest of the week with her.”

After earning a B.S. in music education from Ithaca College in 1951, Kremser began teaching at Oley Valley High School. He then went on to teach at Bethel High School in the Tulpehocken School District. When the Tulpehocken Junior-Senior High School was built, he was reassigned to the new school where he taught band and chorus until his retirement in 1978.

In addition to teaching music, he had his own band, the Harold Kremser Band. “It was a ‘show band,’ and we would play along with a ‘show act.’ I hired musicians who were good at reading music. We would be handed [sheet] music the night of the performance and have to play it on the spot.”

When asked how he feels to retire as the Berks commencement organist, he states, “It was quite an honor–I will miss playing.” He will also be missed by the students, faculty and staff at Penn State Berks.