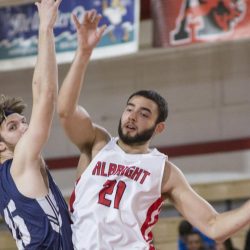 Rappoport registered a career-high 27 points on 11-of-13 shooting from the field in the Lions 85-77 loss to Wilkes on Tuesday, December 18th.  He also added a team-high seven rebounds, three blocks, and went a perfect 4-of-4 from the free throw line.

The Bridgewater, N.J., native currently ranks second on the team with 11.3 points per game, and leads the MAC Commonwealth with 2.6 blocks per game. Rappoport sits just seven blocks short of becoming the sixth player in Albright history to achieve the 100-career block plateau. He also ranks second in the conference with a 71.6 field goal percentage. This is the first time in his Albright career that he has earned player of the week honors.

Albright will return to action on Saturday, December 29 when they will host Rosemont in the first day of the Crowne Plaza Holiday Tournament at 4 p.m.