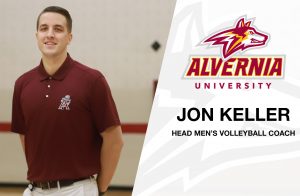 Keller takes the position following two years as Alvernia’s Men’s Volleyball assistant coach. Keller began with Alvernia in January of 2016, ahead of the team’s inaugural 2016-17 season.

“We are excited to have Coach Keller as the next Head Coach of Alvernia Men’s Volleyball,” said Stiles. “Jon has helped build this program from its beginning, and we are excited to see him take it to the next level.”

Keller played collegiately at Division I Rutgers-Newark University where he was a four year starter for the Men’s Volleyball program. In 2009, Keller led the nation in blocks. In 2010, Keller was top five in the nation in blocks and hitting percentage, and was named All-EIVA. In 2015, Keller was inducted into Rutgers-Newark Athletics Hall of Fame.

After college, Keller played professionally in England in 2011. He was a three-time match MVP and was the top blocker in the league.

From 2012-2016, Keller coached with Daniel Boone’s boy’s volleyball program and Red Rose Volleyball Club. Keller is a current member of Team LVC, a member of the National Volleyball Association.

A Reading native, Keller graduated from Exeter High School in 2006 and was named the Boys Volleyball Berks County Player of the Year in 2006.

“I am beyond excited to be able to take over as the Men’s Volleyball head coach,” said Keller. “Being able to lead a team, in my hometown, is somewhat of a dream.”

“After our fall season, I know all the guys on the roster are bought into what I see in this program, and are ready to go out and fight it out on the court every single night. The overall goal of my tenure here at Alvernia is to not only try to win championships, but also be able to help build these student athletes into young men, ready to enter society. I look forward to many successful seasons here at Alvernia and having the ability to grow the great sport of volleyball.

Alvernia’s Men’s Volleyball program competes in the Middle Atlantic Conference. The 2019 season gets underway on Saturday, January 19 against Medaille College at the Penn State Altoona Tri-Match. The Golden Wolves were picked fourth in the MAC Men’s Volleyball Coaches’ Preseason Poll.