“Farm to Table” exhibit dedicated to art inspired by agriculture 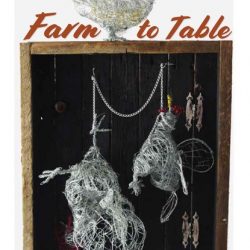 The exhibit, fondly known among the gallery’s artists and patrons as “The Farm,” is the studio’s most popular exhibit and takes a slightly different approach each year. This year gallery director Susan Biebuyck added food art to the exhibit’s focus highlighting her view that “in the end, it’s all about the food.”

“This year we want to acknowledge the support of our Pennsylvania legislators in naming Pennsylvania Council on the Arts as the sponsor of the exhibit,” explained Jane Stahl, Director of Community Relations.

“In 2007, Pennsylvania Council on the Arts funded our fledgling efforts to promote art and our local artists.  The Arts and Activities Alliance was added as a 5th committee of Building a Better Boyertown,” she continued.

“Our first year we staged a few exhibits along Boyertown’s streets, offered some classes and workshops, and took field trips to several artists studios. A little over a year later Studio B opened and staged its first exhibit during Boyertown’s annual Holiday Open House Tour.”

“Pennsylvania Council on the Arts has continued its support for our efforts; we are grateful that our legislators recognize the important of the arts and culture in our communities in maintaining quality of life and economic security,” she concluded.

Prizes will be awarded on Friday night, including the coveted “Best In Show,” which nets the winner a cash prize as well as a featured spot during the agriculturally/environmentally-themed exhibit in 2020.

In 2018, the exhibit was titled “Farm/Earth” combining “The Farm” with the annual April show celebrating the environment to make room in the schedule for an exhibit entitled “Wheels” that received a grant award from Berks County Community Foundation.

Joanne Schlosser was awarded Best in Show in 2018 for her mixed media piece “No Chickens Allowed.” Schlosser is an adjunct faculty member offering art classes at Reading Area Community College and has been a loyal member of Studio B since the studio opened in 2008.

Schlosser explains that her teaching inspires her artwork, opening her mid to unlimited creative potentials and exploration. Mixing linocut printmaking on painted silk is one example. Central
to her work is making the invisible, visible—making what can be seen only with a microscope or visualizing a concept through her art. What matters most to Schlosser is the opportunity to thoughtfully move the observer.

Schlosser explains, “With ‘No Chickens Allowed’ I mock suburban regulations forbidding ownership of pet chickens by presenting a doorway with a wild bird seated on top eating seeds provided by residents.”

In a relief sculpture created with decorative boxes of ink drawings on a stretched canvas that continues the ink designs onto the canvas, the piece visualizes the soulful beauty of jazz music.

“Farm to Table” is being juried by Shelbi R. Stoneback. Stoneback comes from a family of artists and studied as a metalsmith for over 20 years. She is on the Board of Trustees of The Baum School of Art and Vice President of the Board of Directors of Healing Through the Arts.

“We are always very excited to see what our artists bring to this show,” noted Biebuyck. “They have wowed us with their innovation and fresh takes on the traditional subjects of agriculture and farming. And, as a ‘foodie’ myself, I’m eager to see our artists take on this year’s theme.”