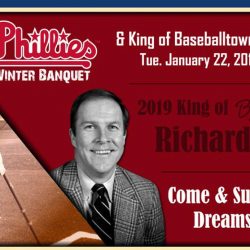 Phillies manager will appear at caravan for second straight season

Prior to being named manager, Kapler served as the Director of Player Development for the Los Angeles Dodgers from 2014 through the end of the 2017 season.  The 43-year-old has spent time in broadcasting and also as a coach for the Israeli national baseball team in 2013. 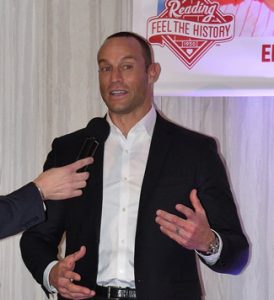 The second-year manager turned in a 12-year career in the major leagues, playing for the Detroit Tigers, Texas Rangers, Colorado Rockies, Boston Red Sox, Milwaukee Brewers and Tampa Bay Rays.  Kapler was a member of the 2004 World Series Champion Boston Red Sox and retired after the 2010 season.

Neris made 53 appearances for the Phillies in 2018.  He struck out 76 batters in 47 2/3 innings, while finishing the season with a 1-3 record and a 5.10 ERA.  The Dominican Republic native will be entering his fifth full season with the Phillies.  He appeared in one game in 2014, his major league debut vs. Houston, and earned the win.

McCarthy, who will help conduct the question and answer session, is entering his eleventh year doing Phillies television play-by-play. In his first run with the club, he spent five seasons (2001-05) as the host of the pre- and post-game radio shows, while also doing radio play-by-play. A native of Jersey City, New Jersey, McCarthy also hosted his own weekday afternoon-drive show on ESPN Radio 920 AM, which concentrated on local sports. He spent the 2006-07 seasons as a radio broadcaster with the New York Mets on WFAN before returning to the Phillies in November of 2007. 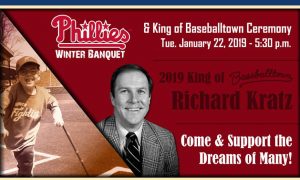 Those who wish to attend can call 610-370-BALL to purchase tickets or go online at fightinphils.tix.milbstore.com