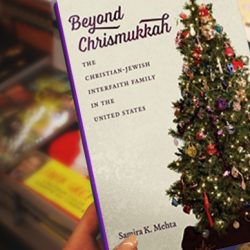 Reading, Pa. – Earlier this month, the Jewish Book Council announced the winners of the 2018 National Jewish Book Awards, now in its 68th year. After careful analysis by a panel of judges who are all authorities in their field, “Beyond Chrismukkah: The Christian-Jewish Interfaith Family in the United States,” by Assistant Professor of Religious Studies Samira K. Mehta, Ph.D., was chosen as a finalist for the Celebrate 350 Award in the category of American Jewish Studies.

According to the Jewish Book Council, “Mehta’s eye-opening look at the portrayal of interfaith families across American culture since the mid-twentieth century ranges from popular TV shows, holiday cards, and humorous guides to ‘Chrismukkah,’ to children’s books, young adult fiction and religious and secular advice manuals. Mehta argues that the emergence of multiculturalism helped generate new terms by which interfaith families felt empowered to shape their lived religious practices in ways and degrees previously unknown. They began to intertwine their religious identities without compromising their social standing. This rich portrait of families living diverse religions together at home advances the understanding of how religion functions in American society today.”

Mehta said the idea for the book came from a conversation with a clergy friend who was seeking answers to a question that no one had answered: What does it mean when families follow both Jewish and Christian traditions?

Being recognized for this scholarly work is “super exciting because it represents a bigger shift in American Jewish studies,” said Mehta. “As many as 50 percent of Jews marry non-Jews. By looking in unconventional places like interfaith marriages we can learn more about a community and what is important to those within that community.”

The National Jewish Book Awards is the longest-running awards program of its kind and were established by the Jewish Book Council in 1950 in order to recognize outstanding works of Jewish literature.