Lee had a week to remember last week. 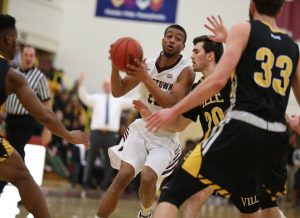 In Kutztown’s two games last week, Lee averaged 42.5 points per game, 8.5 rebounds, four assists and two steals. In a win at Mansfield (Jan. 16) he tallied 37 points, while making his first six three-pointers, and added eight rebounds, five assists, two blocks and three steals. Against Millersville (Jan. 21), Lee netted 48 points, the third-most in a single game in program history, and eclipsed 2,000 career points, ranking second all-time in KU lore with 2,021 career points. He shot 69.5-percent (16-of-23) from the floor, 71-percent (5-for-7) from long distance and 92-percent (11-of-12) from the free-throw line. He added nine rebounds, three assists, one block and one steal in 40 minutes of action.

It is the seventh Athlete of the Week honor for Lee, who was a 2017-18 All-PSAC East First Teamer and an All-Atlantic Region Second Teamer.

Lee was the NCAA Division II leader in three-point percentage last season and is currently second in Division II in scoring at 29.0 points per game.