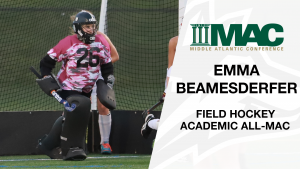 The Academic All-MAC Teams are based off of athletic performance and semester grade-point averages (GPA) for the semester of the championship season. The minimum GPA required is a 3.20, and the student-athlete must remain an eligible member of the team through the conclusion of the season. The MAC sports information directors nominate and vote for the Academic All-MAC Teams, giving 50% weight on both academic success and athletic success.

“These recipients represent the true meaning of being a MAC student-athlete,” said MAC Executive Director Ken Andrews.” This is one of the top conference awards we announce after each season. It honors our student-athletes who excel both in the classroom and in their sport.”

Beamesderfer is the sixth field hockey player to be named to the Academic All-MAC Team since the MAC began the award in the fall of 2013.