LOCK HAVEN, Pa. — Sophomore Rylee Derr of the Kutztown University women’s basketball had a game to remember in KU’s last contest last Saturday, producing a career-high 32 points including a new school-record nine three-pointers, and in doing so, earned Pennsylvania State Athletic Conference (PSAC) East Athlete of the Week honors as announced by the league office on Jan. 28. 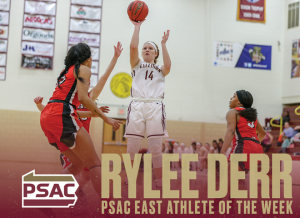 It is the first athlete of the week award this season for Derr and second of her career, being tabbed Freshman of the week once last season.

The Golden Bears (10-9 overall, 8-4 PSAC) defeated East Stroudsburg 81-68 in their last game and have won four of their last five games.

Derr was unconscious from the field, going 10-for-19 (52.6-percent) overall and 9-for-12 (75-percent) from long range. The 10 field goals is a new career-high and her nine three-pointers is two more than the previous program record of seven, set by Derr in a win over Georgian Court on Nov. 14. She added seven rebounds and two assists in 35 minutes vs. the Warriors.