Reading, Pa (Jan. 28, 2019) – Women’s Track and Field sophomore Susanna Pirollo and Men’s Basketball freshman Justin Thomas were named Alvernia Athletes of the Week for their performance during the week of January 21 – January 27. 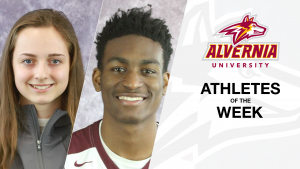 Pirollo earns Player of the Week honors for the second consecutive week following a first place finish in the pentathlon at Widener University’s Jumps and Throws Meet. Pirollo won three of the five events in the pentathlon, including the 800m finale which she won by nearly seven seconds to set a new career best in points with 2,699.

Thomas came off the bench and averaged 20 points a game in a 1-2 MAC Commonwealth week for the Golden Wolves. Thomas scored 13 points against Hood in a 77-66 loss for Alvernia. In a big road win against Stevenson, Thomas led Alvernia with 26 points. The freshman was 5-6 from three point range and was 9-13 overall. He was also 3-3 from the free throw line and collected eight rebounds. In a loss to Messiah, Thomas again led Alvernia in scoring with 21 points. He was 8-13, including a 5-8 performance from beyond the arc. He finished with seven rebounds, four assists, and four steals before fouling out.