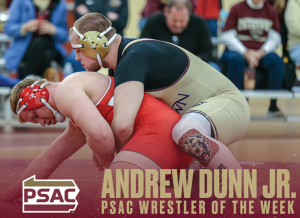 Dunn Jr., a Bethlehem native, improved to 17-2 on the year and 11-0 in duals with a 46-second pin of Gannon’s Keith Swartley, Saturday, sending the 16th-ranked Golden Bears to an 18-17 comeback victory after they trailed by as many as 11 points.

Kutztown’s starting heavyweight, ranked No. 7 in the nation by the National Wrestling Coaches Association (NWCA), defeated No. 8 Jacob Robb of 22nd-ranked Mercyhurst during the Bears’ 23-14 win on Friday night. Dunn Jr. collected 10 back points, two takedowns and a reversal in a 17-6 major decision.

Kutztown, which is in the midst of an 11-match dual winning streak (11-1 overall), has produced the PSAC Wrestler of the Week each of the last two weeks. Dunn Jr.’s selection follows Connor Rogovich’s on Jan. 21.