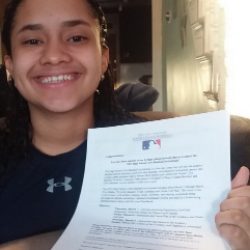 Aneyshka Aponte, a female baseball and softball player for the Berkshire Baseball & Softball Club, which is a subsidiary of the BIG Vision Foundation has been selected by Major League Baseball to participate in the 2019 MLB and USA Baseball High School Girls Baseball Invitational.

The event will be held at Globe Life Park and the Texas Rangers Youth Academy in Dallas, Texas.

Aponte, a current junior at Reading High School is one of only 64 girls selected internationally for the event, which will take place from March 7th through 10th, 2019. 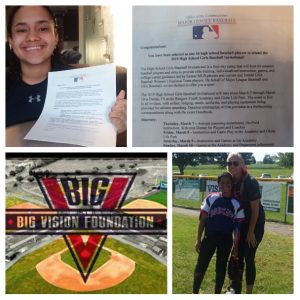 With Aponte only arriving in the mainland of the United States in June of 2018, she was selected to participate on the International Team for the event. She left her homeland and immediate family and friends in Puerto Rico and moved in with her aunt and uncle in Reading, PA in order to create more opportunities in baseball and softball. With her hard work and dedication, the gamble is starting to pay dividends.

Immediately after arriving in the states, her aunt and uncle, Loan Rivera-Aponte and Angel O’Fray got her registered in Berkshire Baseball & Softball Club’s “Work Hard, Play Hard” program. The program, which BIG Vision Foundation unveiled at the start of the 2018 season eliminates registration fees and requires its players to provide community service hours in order to secure their roster spot. The program was inspired by an episode of Real Sports with Bryant Gumbel which pointed out that even though youth sports has now become an over $17 billion industry, participation has declined over 8% in the past 10 years.

Aponte played on the Berkshire Titans boy’s baseball team in the summer of 2018 and then also played on the Berkshire Bobcats fastpitch softball team as well in the fall of 2018.
She won “Defensive Player of the Year” honors for the Bobcats team and more importantly was recognized as a recipient of one of the organization’s, “Ruth Hartman Memorial Trailblazer” awards for being only the second female to play on a boy’s baseball team in the organization’s history. The award is to honor the legacy of the late Ruth Hartman, who was a member of the AAGPBL in the 1940’s and later started the girls’ softball program at Reading High School.

O’Fray is quick to point out that if it wasn’t for the “Work Hard, Play Hard” program that Aponte and his own three children would not have been able to participate in such a high caliber program.

BIG Vision Foundation President, Dan Clouser said that Aponte is very deserving of the honor to be selected by MLB because, “She is an amazing young woman. One the hardest workers I’ve ever seen. She loves both the games of baseball and softball and plays with passion and purpose every time that she steps on the field. Our organization is honored to have her as part of the BIG Vision Family.”

The event will provide individualized, professional instruction, competitive play, and a tournament style showcase for 64 female high school aged baseball players. Coaching and instruction will be provided by USA Baseball from former and current National Team players. Speakers during the event will represent Major League front offices and women in various positions within and outside of the world of professional baseball.