Details Announced for Battle of the Badges for the FirstStates Cup Game Feb. 24 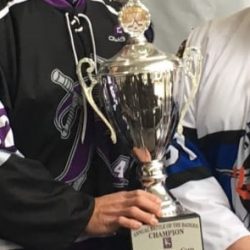 One ticket gains entry into both games and a portion of every ticket sold from the game benefits the Battle of the Badges Scholarship Fund established to help the children of firefighters and police officers. Tickets to the doubleheader are available by calling 610-898-PUCK (7825) or visiting http://bit.ly/Battle19

“The men that play in these games are our local heroes and we are honored to partner with FirstStates Financial and the Reading and Allentown departments for the 14th straight year,” said Royals President and General Manager Shawn Hackman. “The Battle of the Badges Scholarship fund is essential to help make our community strong by supporting the role models that participate in this annual game and we are looking forward to another fun contest this season.”

Why did the game begin?

The BOB Game began in 2006 as a benefit game played in remembrance of fallen Reading Police Officer Michael H. Wise II, who died in the line of duty in June of 2004, and Reading Police Officer Scott A. Wertz who was fatally wounded in the line of duty in August of 2006.  The game also raises funds for the police and fire departments Battle of the Badges Scholarship Fund.

Series
The all-time series between the Reading Police and Fire Departments and the Allentown squads is tied, 1-1. Allentown won in Feb. 2018, 3-2.

In the historical matchup between the Reading Fire Department and Reading Police Department, Fire won the series 6-4-1.