KUTZTOWN, Pa. – Rylee Derr and Anthony Lee of the Kutztown University basketball teams were named to the 2019 Lehigh Valley Small College Basketball Media Organization Team of the Year on Feb. 14, at a luncheon hosted at DeSales University. 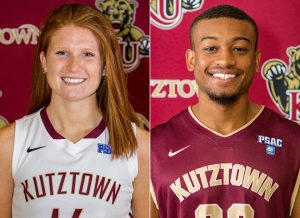 Lee also earned the Pete Nevin’s Player of the Year award, giving KU its second winner in a row, joining former teammate Ethan Ridgeway, who won it last year. The Player of the Year award was renamed in 2007 in honor of Pete Nevins, ESU’s sports information director from 1969-2002 and the founder of the small college basketball organization. The POY is decided by a vote from each qualifying institution’s (KU, East Stroudsburg, Moravian, Muhlenberg, DeSales and Cedar Crest) sports information directors.

This is the second straight year the sophomore Derr earned a spot on the Team of the Year and first for Lee. The Team of the Year recognizes student-athletes from six local colleges in the Lehigh Valley area – Kutztown, Moravian, Muhlenberg, DeSales, East Stroudsburg and Cedar Crest – for their athletic accomplishments during the season.

Kutztown hosts Mansfield on Saturday, Feb. 16 at Keystone Arena beginning with the women’s game at 1 p.m.