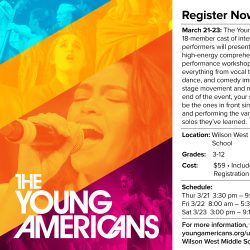 Sinking Spring, PA – Sinking Spring’s students are preparing for the opportunity of a lifetime as they take classes and perform with California-based, The Young Americans. This nonprofit music, dance, and performance company will make a tour stop at Wilson West Middle School from March 21 through March 23, during its Eastern Regional Tour. The Young Americans is committed to inspiring the world through global music outreach and performance excellence. The organization will devote the tour to teaching, inspiring, and supporting school music programs across the United States.

“We want to make sure that young people have the opportunity to participate in quality performing arts programs and get to experience the transcending power of music,” says Bill Brawley, Chief Artistic Officer of The Young Americans.

Since becoming the world’s first show-choir in 1962, The Young Americans has expanded its programming to focus on music outreach, and it now serves as the oldest and largest youth music advocacy movement in the world. The Young Americans Performing Arts Workshop takes place over three days – two days of fast-paced rehearsal leading into an unrivaled, fully-staged performance. The Young Americans’ unique teaching style provides an encouraging environment for students to push past insecurities to achieve the seemingly impossible. With 40 diverse, international cast members, their team is able to reach every student to reveal their best qualities as performers and as people. As a result, The Young Americans’ workshops energize and strengthen existing music programs while uniting the community.

“Music is just the vehicle we use. It creates the perfect environment for transformation to happen,” says Steven Haines, CEO of The Young Americans. “It’s incredible to watch a group of students get together and work as a team in a matter of days, developing new friendships, self-confidence, and acceptance among their peers. Music is the ultimate connector, and our programs are successful everywhere we go, regardless of language, socioeconomic backgrounds, or cultures.”

Registration is open to 3rd-12th graders in the Sinking Spring area, and more details about the workshops can be found on The Young Americans’ website: www.youngamericans.org/us, or by contacting David and Carolyn Petersen at [email protected] The final show will be on March 23, 2019 at 7:00 PM and is open to community members. Tickets will be available for purchase at the door.

About The Young Americans

Founded in 1962 in Hollywood, California and known as the world’s first show choir, this nonprofit 501c-3 performance and music education group has no political or religious affiliations and uses music as a tool to inspire youth and audiences all across the world.  From their early days of performing with legends such as Andy Williams, Ed Sullivan, and Bing Crosby to their current International Music Outreach Tours, which include 375+ shows each year across 30 countries, The Young Americans remain the pinnacle of excellence in both music and dance performance.

More information about The Young Americans can be found at www.youngamericans.org