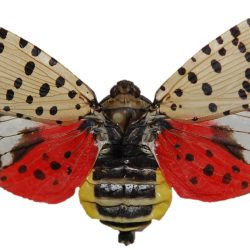 The Center for the Agricultural Sciences and a Sustainable Environment (CASSE) at Penn State Berks is the “killing fields” for spotted lantern flies. At least that’s the goal of researchers from Penn State University’s College of Agriculture Sciences, who have been working with researchers from Penn State Berks and Penn State Cooperative Extension to study the biology and also the effectiveness of various insecticides on the pests that have invaded and wreaked havoc on Berks County since 2014.

It all began when Dr. Michael Fidanza, Professor of Plant and Soil Science at Penn State Berks and Director of the CASSE, was approached in 2018 by researchers from the College of Agriculture Sciences who needed a site to conduct a preliminary investigation on the biology and life cycle of the spotted lantern fly, as well as various control measures. The CASSE proved to be the perfect location for this collaborative research study.

Under the leadership of Dr. David Biddinger, tree fruit research entomologist and research professor, and Dr. Julie Urban, associate research professor, both from the Penn State Department of Entomology, a task force brought potted peach trees and grape vines to CASSE. Then they visited sites in Berks County with a large amount of spotted lantern flies, like the trees around the Pagoda, and simply scooped the nymphs into a mesh laundry bag, which was then double bagged and driven to campus for their study.

Plans are underway for research to continue as a three-year project is proposed to begin this spring 2019 on a three-acre plot at CASSE. For the study, both potted grape vines and spotted lantern flies will be brought to campus, and testing of insecticides will continue.

In addition to faculty researchers working on the projects, students enrolled in a Penn State Lehigh Valley biology course taught by Karen Kackley are also involved in the research. Fidanza adds that last summer a Penn State graduate student studying entomology drove to Berks from University Park on a regular basis to check on the plants in the study.