ANNVILLE, Pa. – Albright Freshman RHP Willie Kimmel III was named the MAC Commonwealth Pitcher of the Week, as announced by the league office on Feb. 25. 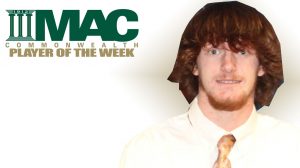 Kimmel earned his first career save in his collegiate debut during Saturday’s 3-2 win at Scranton. The Hegins, Pa., native allowed just one hit and fanned one over three innings of work and stranded the tying run on base in the ninth inning.

Kimmel becomes the first Albright player to receive a Player/Pitcher of the Week award since OF Jeff Yordy was named Player of the Week on May 1, 2017.

The Lions are back in action on Saturday, March 2 when they head to Marywood for a doubleheader. First pitch of game one is set for noon.