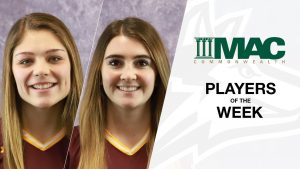 Acker went 3-5 at the plate, scoring a run and driving in four, in a doubleheader split on Sunday at Shenandoah. Acker hit a two-run, game-tying home run to left field as part of a six-run seventh inning to lead Alvernia to an 11-8 win. Acker was also 1-for-1 on stolen bases and threw out a Shenandoah base runner on a steal attempt.

Decker played a vital role in Alvernia’s 11-8 win over the Hornets. Decker pitched 2.2 innings in relief, including a three-up three-down performance in the bottom of the sixth. The freshman allowed just one run on three hits with a strikeout and a walk en route to her first collegiate win.