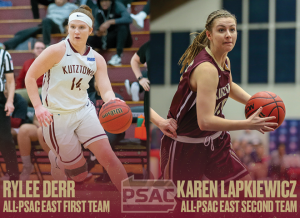 Derr earned First Team honors while Lapkiewicz was named to the Second Team. It was the second straight season Derr made All-PSAC after being on the Second Team last year. It is the first postseason recognition for Lapkiewicz.

It has been an historic season for the Golden Bears (18-11) thus far. They won a share of the PSAC East title, the first time since 1996. In defeating Lock Haven University in the PSAC Quarterfinals Wednesday, March 6, the Maroon and Gold qualified for their first Final Four since the 2009-10 season. They also set a new program-record for made three-pointers in a season with 224. They currently have 240.

Derr, who holds the school-record for three-pointers in a game (nine), ranks 11th in the PSAC in scoring at 17.1 points per game. She’s also second in three-pointers made (85), sixth in free-throw percentage (80.4) and 15th in rebounding (6.8). She has started all 29 games this season and all 30 last year, never missing a game.

As a freshman last season, Derr tallied 409 points, the most by a freshman in program history. She has been named a PSAC Athlete of the Week twice this season and is a two-time Lehigh Valley Small College Basketball Media Organization Team of the Year member.

Lapkiewicz has had a breakout junior campaign. She is second on the team, averaging 11.3 ppg, a 3.8 ppg boost from last season. Lapkiewicz is a team captain and has started all 29 games this season and has played in all 88 KU games through her first three seasons.

Derr, Lapkiewicz and the rest of the Kutztown women’s basketball team host its first ever Final Four this weekend with a semifinal double-header on Saturday, March 9, beginning at 1 p.m. The top seed in the West Division, IUP, takes on #2 seed in the East Bloomsburg. Following that game, KU faces #2 seed from the West California (PA) with a tentative tip-off of 3:30 p.m.