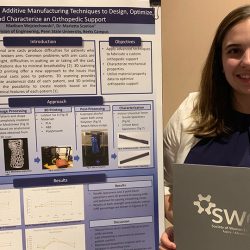 Madison Wojciechowski, a junior majoring in Mechanical Engineering at Penn State Berks, was selected as a finalist to present her research at a Society of Women Engineers WE Local Conference in Tampa, FL on February 15–16, 2019. She presented a 15-minute lightning talk and a poster presentation on her research to a panelist of judges from both industry and academia. As a result, Wojciechowski placed second overall.

Her work titled “The Use of Advanced Additive Manufacturing Techniques to Design, Optimize, and Characterize and Orthopedic Support” was a result research that Wojciechowski conducted with Dr. Marietta Scanlon, Assistant Teaching Professor in Engineering, at Penn State Berks. The study began last summer through Penn State’s Multi-Campus Research Experience for Undergraduates, a program that supports engineering students. Selected students complete their proposed engineering research project in conjunction with two Penn State faculty members — one from the student’s home campus and one based at University Park.

For the research project, Wojciechowski sought to develop a process to create customized orthotics (arm casts) that would allow for breathability, water-resistance, and other features. She began by creating an image of her arm using a 3D scanner and then she made a cast using a 3D printer. Wojciechowski then tested the materials to see how different variations affected the strength and comfort of the cast.

This research comes on the heels of a similar project that Wojciechowski and an alumnus worked on through the college’s partnership with Penn State Health St. Joseph and the Berks LaunchBox initiative. When the LaunchBox was first established, one of the goals was for students to collaborate with physicians to develop medical innovations. Dr. Martin Ross from Penn State Health St. Joseph approached Penn State Berks administrators about the need for a better arm sling – one that was more comfortable and better fitting.

Ross teamed up with Scanlon, who asked her students to work on the project. Wojciechowski jumped at the opportunity to work on it with then-student Nickolas McTish ’17, Electro-Mechanical Engineering Technology. Together they developed a prototype that they are now working to market through the LaunchBox. They formed Adaptive Orthopedix LLC and are currently working through Penn State University to secure a patent.

When asked about her plans after graduation, Wojciechowski expressed interest in working in the medical field and using her education in engineering and technology.

“Working on all of these projects has really opened the door to a lot of opportunities for me,” stated Wojciechowski. “I’m conducting hands-on research as an undergraduate and I want to take it to the next level.”

In addition to her academic achievements, Wojciechowski was selected as a member of the North Eastern Athletic Conference (NEAC) Third Team on Oct. 31, 2018. She has received all-conference recognition all three years of her career. She was a second team recipient as a freshman, while earning first team honors and being named the Defensive Player of the Year in 2017.

About the Berks LaunchBox

Penn State Berks recently expanded its entrepreneurship programming with a new innovation hub located within the GoggleWorks Center for the Arts in Reading, Pennsylvania. The Berks LaunchBox is open to members of the Greater Reading community of all ages. It offers a maker space with 3D printers for prototyping, entrepreneurship workshops, co-working space for startups, an Idea Test Lab accelerator program, Meetups focused on topics related to business development and technology, and special youth programs.