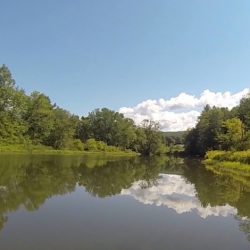 HARRISBURG, Pa. – Clean-water advocates are calling on Congress to reject the Trump administration’s proposed 90 percent cut in funding for the Chesapeake Bay program.

For the third year in a row, the administration is asking for drastic cuts to the program that supports water-cleanup efforts throughout the Chesapeake Bay’s 6,400 square-mile system. So far, funding has remained constant at $73 million a year.

William Baker, president of the Chesapeake Bay Foundation, says most of that funding goes to programs that are successfully reducing sediment and keeping pollution from entering rivers and streams far upstream from the bay.

“Pennsylvania would receive enormous benefits for local water quality thanks to the Chesapeake Bay Program funding, and the cut of 90 percent is really just cutting it off at the knees,” says Baker.

This year, a coalition of more than 230 nonprofit organizations is calling on Congress to increase Chesapeake Bay cleanup funding to $90 million. Baker says those additional funds would go into direct pollution-reduction programs.

He adds the battle to save the bay is far from over. Last year’s record rainfalls, including in Pennsylvania, caused an increase of pollution entering the bay from the watershed.

Baker notes that the ongoing efforts have made a significant difference. For example, for the first time in decades, there are now more than 100,000 acres of underwater grasses in Chesapeake Bay.

“Those sorts of improvements give the bay resilience,” says Baker. “Think of it as being able to take a punch and come back for another, if nature delivers that.”

Baker says there is strong, bipartisan support for the Chesapeake Bay restoration efforts.