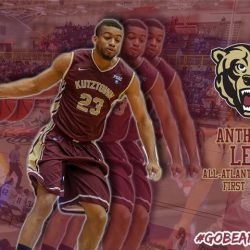 KUTZTOWN, Pa. – Anthony Lee of the Kutztown University men’s basketball team has etched his name in to many KU record books and has received numerous accolades throughout his four-year playing career. The Willow Grove native can add another one to his resume as Division II Conference Commissioners Association (D2CCA) named Lee to the All-Atlantic Region First Team.

It is the second All-Atlantic Region recognition for Lee and his first time on the First Team, after earning Second Team honors last season. It adds on to the list of 2018-19 accolades, as he was also named to the Pennsylvania State Athletic Conference (PSAC) First Team and was the conference’s East Division Athlete of the Year earlier this month, and Lee was a three-time PSAC East Athlete of the Week award winner this season. He has been a member of the All-PSAC teams each of his four seasons at KU, having received First Team the last two seasons and Second Team in his first two years in Maroon and Gold. Lee became just the sixth player in program history to earn the honor of Athlete of the Year in the conference.

Lee holds school records for points in a game (50) and season (822), scoring average for a season (27.4 ppg), three-pointers made in a game (8), season (92) and career (275), three-point percentage in a season (.516) and career (.468), and free-throw percentage in a season (90.1). His average of 19.4 points per game (ppg) through his four years ranks fourth all-time at KU. He was a 2018 All-Atlantic Region Second Teamer and the 2019 Lehigh Valley Small College Basketball Media Organization Pete Nevins Player of the Year. Lee was also a seven-time PSAC East Athlete of the Week honoree throughout his career.

The Golden Bears (16-14 overall) 2018-19 campaign ended in the PSAC Quarterfinals Wednesday, March 6, in a loss at top seed East Stroudsburg. In that game, Lee recorded his first career triple-double and the first one for Kutztown since Stephen Dennis back on Dec. 2, 2009. He finished with 21 points, 11 rebounds and a career-high 10 assists, and also added two blocks and one steal and never left the court, playing in 40 minutes. Lee finished his career scoring in double-figures for 59 straight games.

The team is sponsored by the Division II Conference Commissioners Association encourages and promotes Division II athletics and high standards of sportsmanship as important elements of higher education. The CCA is a key communications link among the conferences as they discuss views, policies and regulations that impact Division II intercollegiate athletics and works closely with the NCAA as a communications channel to NCAA Division II member colleges and universities.