KUTZTOWN, Pa. – Freshman Taye Dairo and head coach Ray Hoffman of the Kutztown University women’s track and field team wrapped up an historic 2018-19 indoor season by earning major awards from the Pennsylvania State Athletic Conference (PSAC). Dairo was honored as the PSAC Freshman of the Year, while Hoffman was recognized as women’s coach of the year. 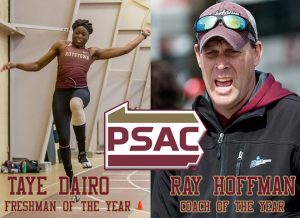 A freshman from Harrisburg, Dairo broke onto the scene during her first collegiate season in Maroon and Gold. In just her first collegiate meet at the Fast Times Before Finals at Lehigh University on Dec. 8, she won the high jump at a PSAC-Qualifying mark of 5-5, which ranks fifth all-time in KU history.

Fast forward to two-and-a-half months later, and Dairo became a PSAC champion by winning the high jump at a mark of 1.69m (5-6.50) at the 2019 PSAC Indoor Championships back on Feb. 23, and in doing so, was named All-PSAC for the first time in her career. Earlier this month, Dairo was also one of six women’s T&F athletes to earn All-Atlantic Region honors.

“Taye has a work ethic that is hard to match,” said Hoffman, who also credits assistant coach Amy Mantush for her regular work with Dairo. “She puts the work in everyday and this honor is the direct result. We are very excited to see what the future holds for Taye during her career here at KU.”

Hoffman, along with his staff, also had a strong start to the track and field season. In helping to lead the Golden Bear women to the PSAC Indoor Championship in Feb., the fourth title in program history, Hoffman received the Atlantic Region women’s coach of the year, as announced by the U.S. Track & Field and Cross Country Coaches Association (USTFCCCA).

Hoffman, who is in his 13th season as the track & field head coach, has coached 125 PSAC Champions and 300 All-PSAC performers. On the national level, he has had 119 NCAA qualifiers and 18 All-America performers. On the track, Hoffman’s athletes have set 60 school records during the indoor and outdoor seasons.

Kutztown opened its 2019 outdoor campaign last weekend at the 49er Classic in Charlotte, N.C. It will next compete at the West Chester University quad meet, along with East Stroudsburg, Bloomsburg and West Chester on Saturday, March 30.