Fightins to Play as “Los Peleadores” on Fiesta Fridays in 2019 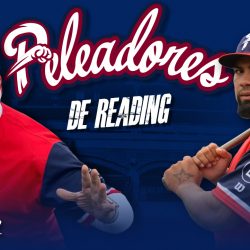 (Reading, PA) – In conjunction with Minor League Baseball’s Copa de la Diversión initiative, the Reading Fightin Phils will play as Los Peleadores for five games on Savage 61 Fiesta Fridays, presented by Don Julio Tequila, during the 2019 season. These nights will feature specialty uniforms, Hispanic/Latino food and music, and other cultural elements throughout the ballpark.

This season the Fightins will celebrate Reading’s Latino culture by playing as Los Peleadores on select Friday home games. Los Peleadores is a direct translation of “The Fighters,” a concept derived from the idea that the city, the team, and the region are all “Fighters,” fighting for the success of “R State, R County, R City, R Team, and R Youth.”

These nights will include food vendors featuring their Hispanic/Latino dishes, and Hispanic/Latino music such as salsa, meringue, reggaeton, and Spanish trap music. The starting lineups, batter introductions, and other parts of the game presentation will be in Spanish, and flags from Hispanic/Latino countries will be displayed. Other cultural elements will be featured such as Hispanic/Latino dance, art, community leaders, and more.

In addition to Fiesta Fridays, FirstEnergy Stadium will feature Hispanic/Latino food items at all 70 home games. A Spanish-language pocket schedule has been created, along with the Fightins’ Spanish-language website Readingbeisbol.com.