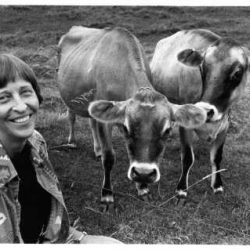 Under the direction of RCS Music Director, Dr. Graham Bier, and Vox Philia Director, Dr. David McConnell, the choirs will team up to present as concert that is very much “here and now”: exclusively music by living American Composers. Pieces by the illustrious Gwyneth Walker are joined by selections by Whitacre and the luscious lines of Laurisden. Please Stay – a Jake Runestad selection will be a local premiere. Runestad is mentioned in the same breath as Whitacre in choral circles these days, having just won the Raymond A. Brock Memorial Commission Award at the National ACDA convention. Whitacre wrote Leonardo for that same commission, and one could argue that is what brought him national prominence! Join us for a vibrant afternoon with two choirs as they give voice to the music of our generation.

Composer, Gwyneth Walker, will be our Guest Composer at this concert. Both choirs will be working with Gwyneth at their Saturday April 6 rehearsal. On Monday, April 8th, Gwyneth will be visiting Wilson High School and meet with Emily Fredericks and her three choral ensembles. Gwyneth will discuss her process of creating the four pieces of her music that the choirs are currently preparing for a concert.

RCS and Vox Philia will hold a reception following the concert in Lundin Hall at Atonement when the audience will have the time to meet both choirs, Gwyneth Walker and the Music Directors. Reading Choral Society will also be awarding four $1,000 high school and college scholarships and various awards to area high school students at the reception.

Widely performed throughout the country, the music of American composer Gwyneth Walker is beloved by performers and audiences alike for its energy, beauty, reverence, drama, and humor. Dr. Gwyneth Walker (b. 1947) is a graduate of Brown University and the Hartt School of Music. She holds B.A., M.M. and D.M.A. degrees in Music Composition. A former faculty member of the Oberlin College Conservatory, she resigned from academic employment in 1982 in order to pursue a career as a full‐time composer. For nearly 30 years, she lived on a dairy farm in Braintree, Vermont. She now divides her time between her childhood hometown of New Canaan, Connecticut and the musical community of Randolph, Vermont.

Gwyneth Walker has been a proud resident of Vermont for many years, and she is the recipient of the 2000 “Lifetime Achievement Award” from the Vermont Arts Council as well as the 2008 “Athenaeum Award for Achievement in the Arts and Humanities” from the St. Johnsbury Athenaeum. In 2012, she was elected as a Fellow of the Vermont Academy of Arts and Sciences. She also received the 2018 “Alfred Nash Patterson Lifetime Achievement Award” from Choral Arts New England.

A composer since age two, Gwyneth Walker has always placed great value on active collaboration with musicians. Over the decades, she has traveled to many states to work with instrumental and choral ensembles, soloists, and educational institutions as they rehearse and perform her music. A number of these visits have developed into ongoing relationships. In 2018, Walker was named Composer‐in‐Residence for the Great Lakes Chamber Orchestra in Petoskey, Michigan. Walker’s catalog includes over 350 commissioned works for orchestra, chamber ensembles, chorus, and solo voice. A special interest has been dramatic works that combine music with readings, acting, and movement. The music of Gwyneth Walker is published by E.C. Schirmer (choral/vocal/instrumental music) and Lauren Keiser Music (orchestral/instrumental music).

More information and photos may be found on her website: www.gwynethwalker.com